Clinical research for EFT Tapping provides measurable evidence of what many of us already know, Tapping works! What’s even more impressive, is when researchers replicate these landmark studies. Science shines when a totally different group of people in other parts of the world show similar (if not better!) results. 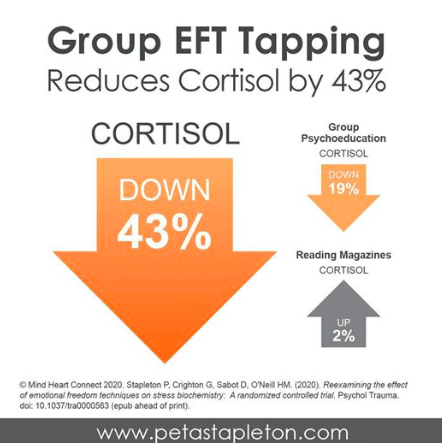 That’s what Dr. Peta Stapleton of Bond University in Australia did recently when she replicated Dawson Church’s famous 2012 cortisol study. Peta’s study results have also been published in the respected APA Journal, which is a huge win for the field too. The only change she made to the original individually delivered trial was that she offered the EFT Tapping sessions in groups instead – and she achieved a 43% reduction in cortisol in 1 hour of EFT by doing this. Amazing! Read the full study abstract here, but I’ll include the technicals below for those who like me love to explore the science.

CONCLUSIONS: Findings support the original study. They indicated EFT to be an efficient and effective brief treatment for reducing biological markers of stress.